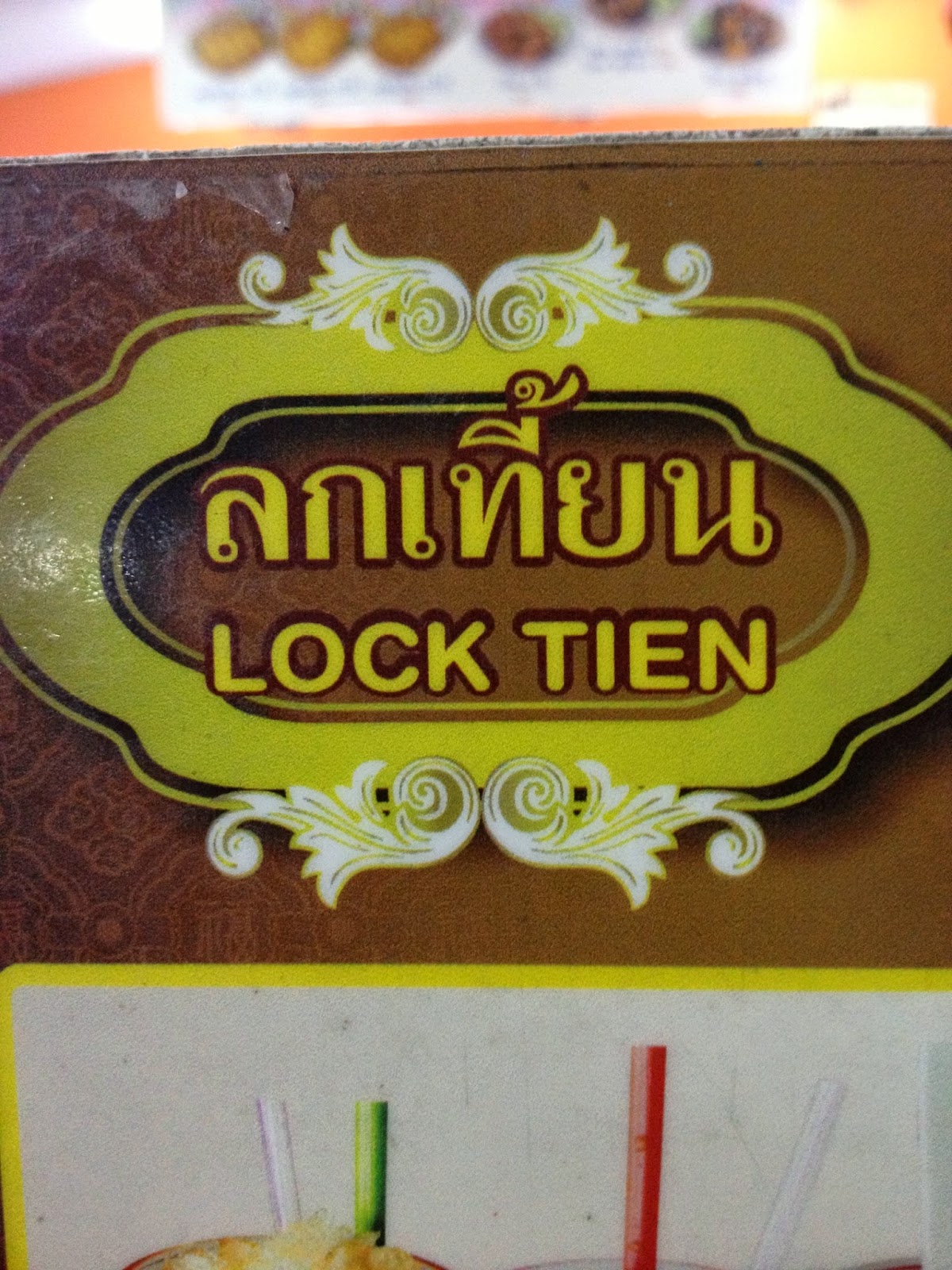 Lock Tien Food Court is a stop for everyone because there is so much to see. It is a Traditional Food Court so find your seat and then go and get your food so that there is always someone looking after the things on your table.

The Food Court is popular with the local people and with Tour Groups from Bangkok so please expect it to be busy. In fact the Food Court has been at this position for the last 50+ years

It is in the very near to the heart of Phuket Old Town so simply go and have a look and see whether you are able to manage eating there but it can be quite busy so get there before midday before it gets busy - however if you are late then it can be sold out!

There are a number of food stands around the outside so there is a quite big selection of dishes. 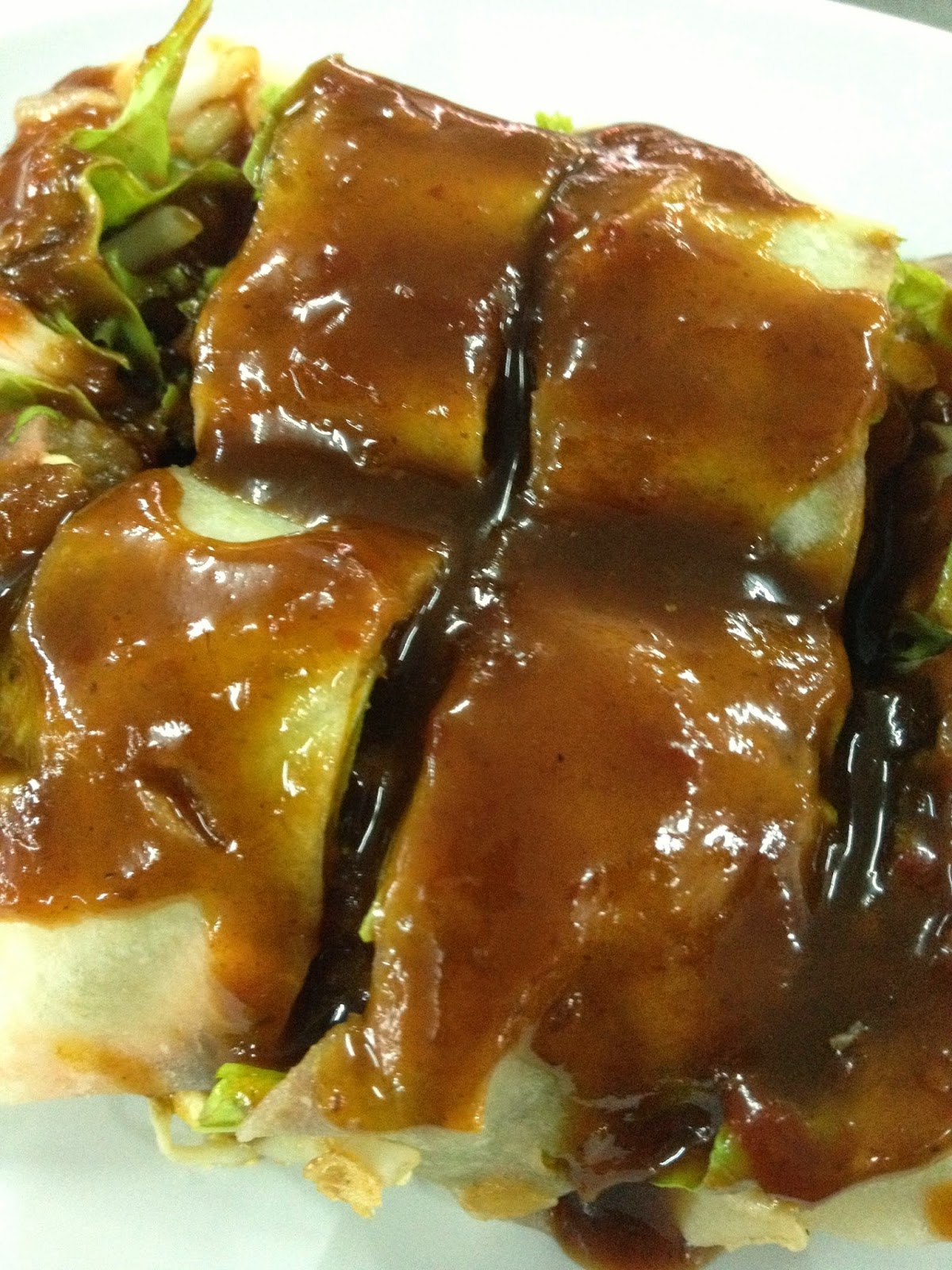 Well - the Por Pia (Fujian Style) Spring rolls were fabulous and yes they were good and they were certainly fresh - i watched the man roll them for us! After reading more I found that the gentleman rolling them may have been Khun Ko Lai, who has been rolling these specific style spring rolls for more than 40 years! 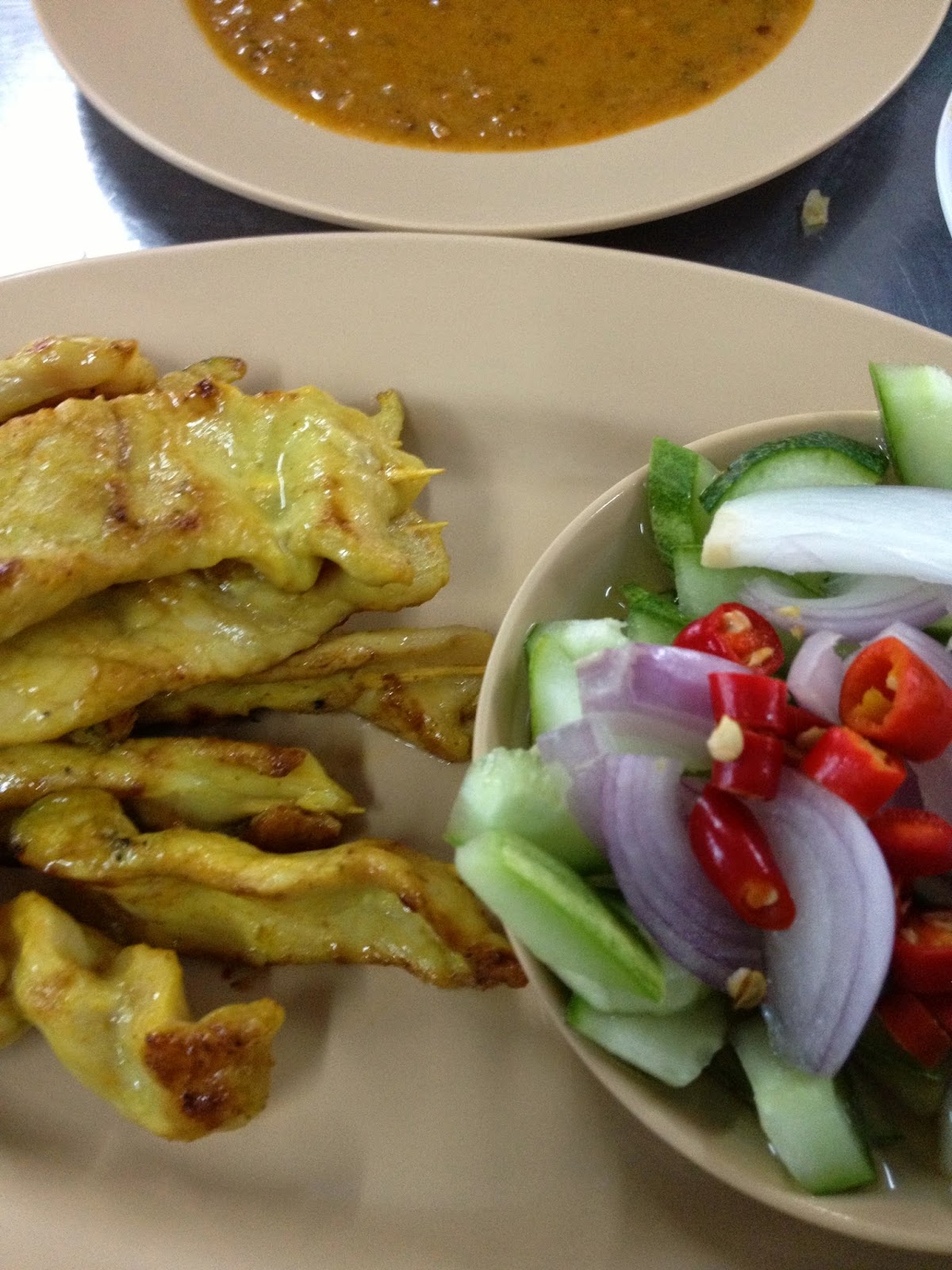 I kept reading about the Satay in a lot of reviews and they seemed to be like many of the Street food stalls scattered throughout Phuket. 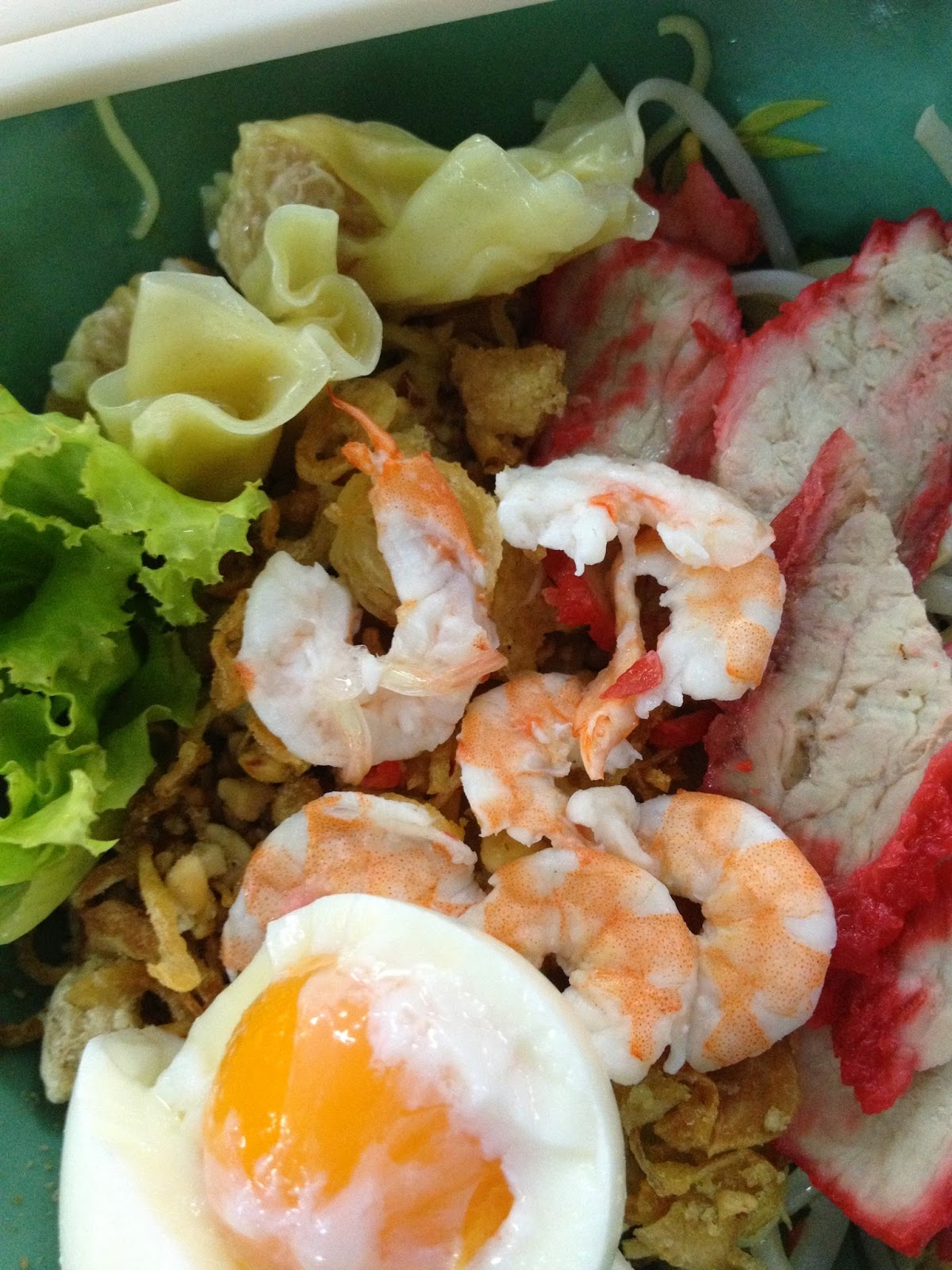 Then came the noodles and we chose a different style of Hokkien Nooodles - 'Mee Nam Tom Yum Kong' - very nice but still too spicy for many, I enjoyed it sooo much I spooned out the soup which was left. 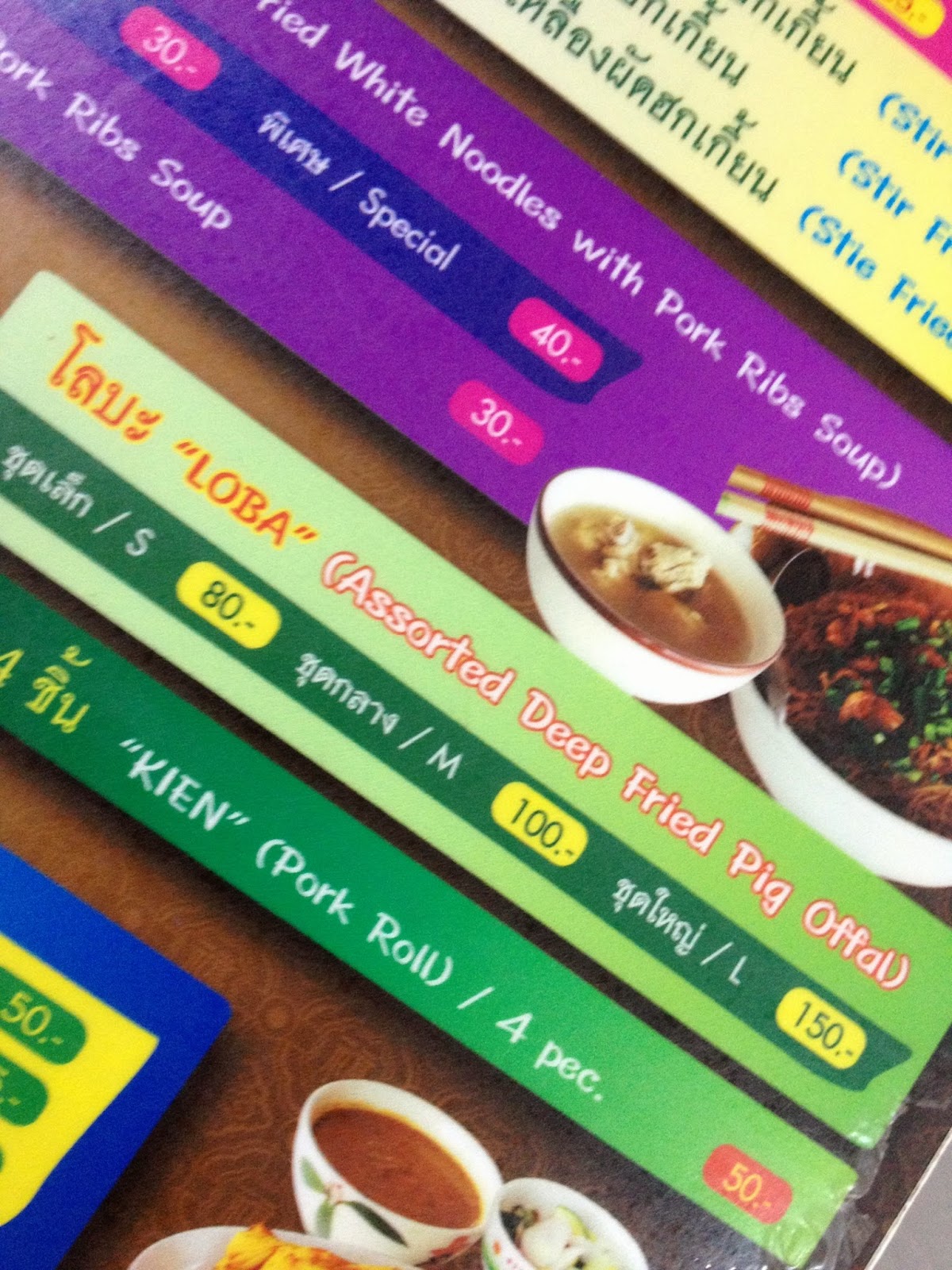 I would say that it is also popular with people who have had dinner and choose to come here for the Traditional Thai Deserts - including the 'Oh Eaw' - a mixture of shaved ice, beans, jelly banana and syrup. 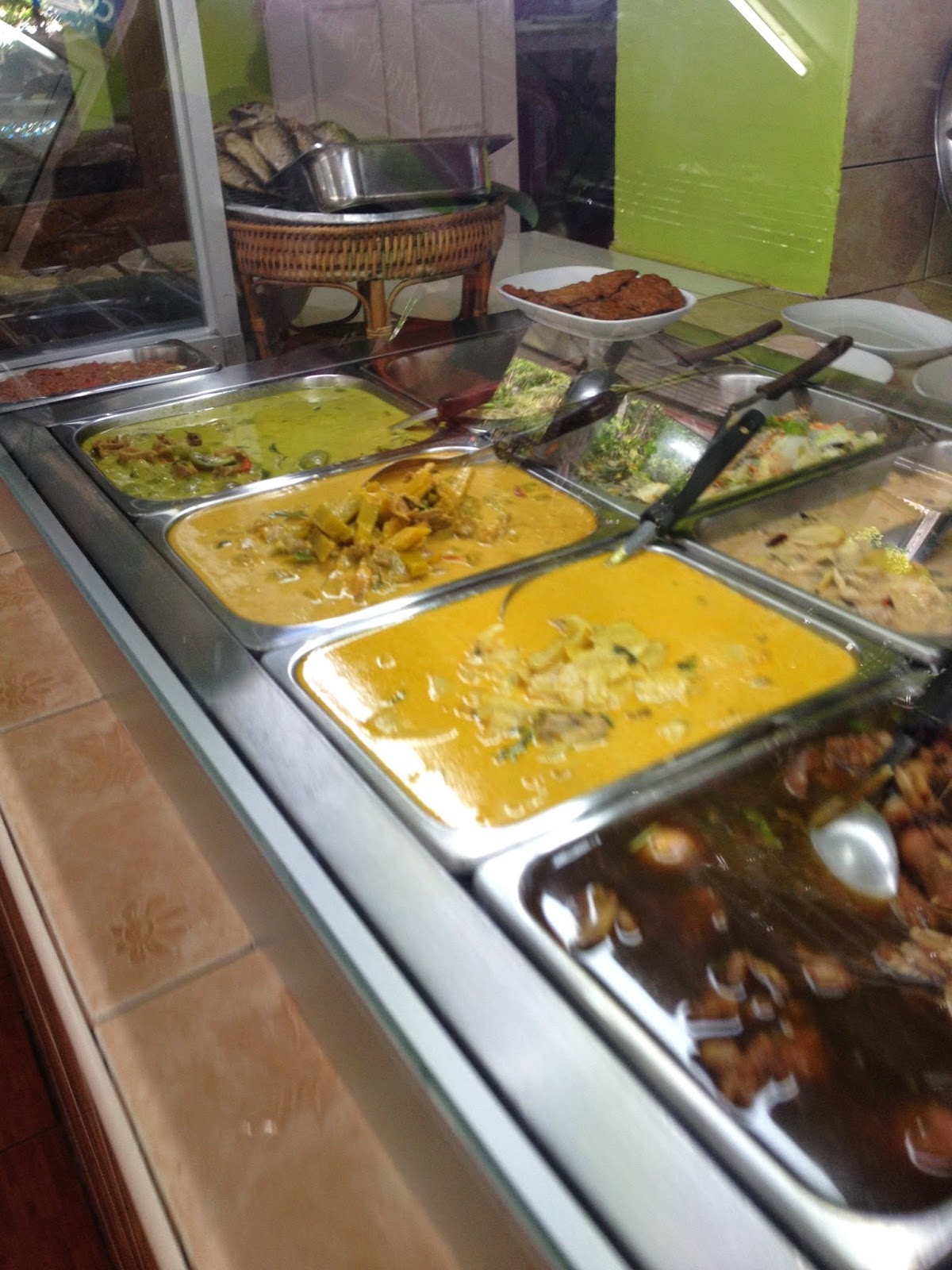 บ้านขนมไทย (ชาววัง) is a Thai Restaurant outside Phuket Old Town (see map below) so it is not a restaurant that is easy to access without independent transport.

If you would like to try some Local Thai Food then this is certainly a place for you to choose, apparently the Gaeng Som is delicious but it is something which I choose not to try. There was the traditional deep fried chicken as well so Jemma was happy. 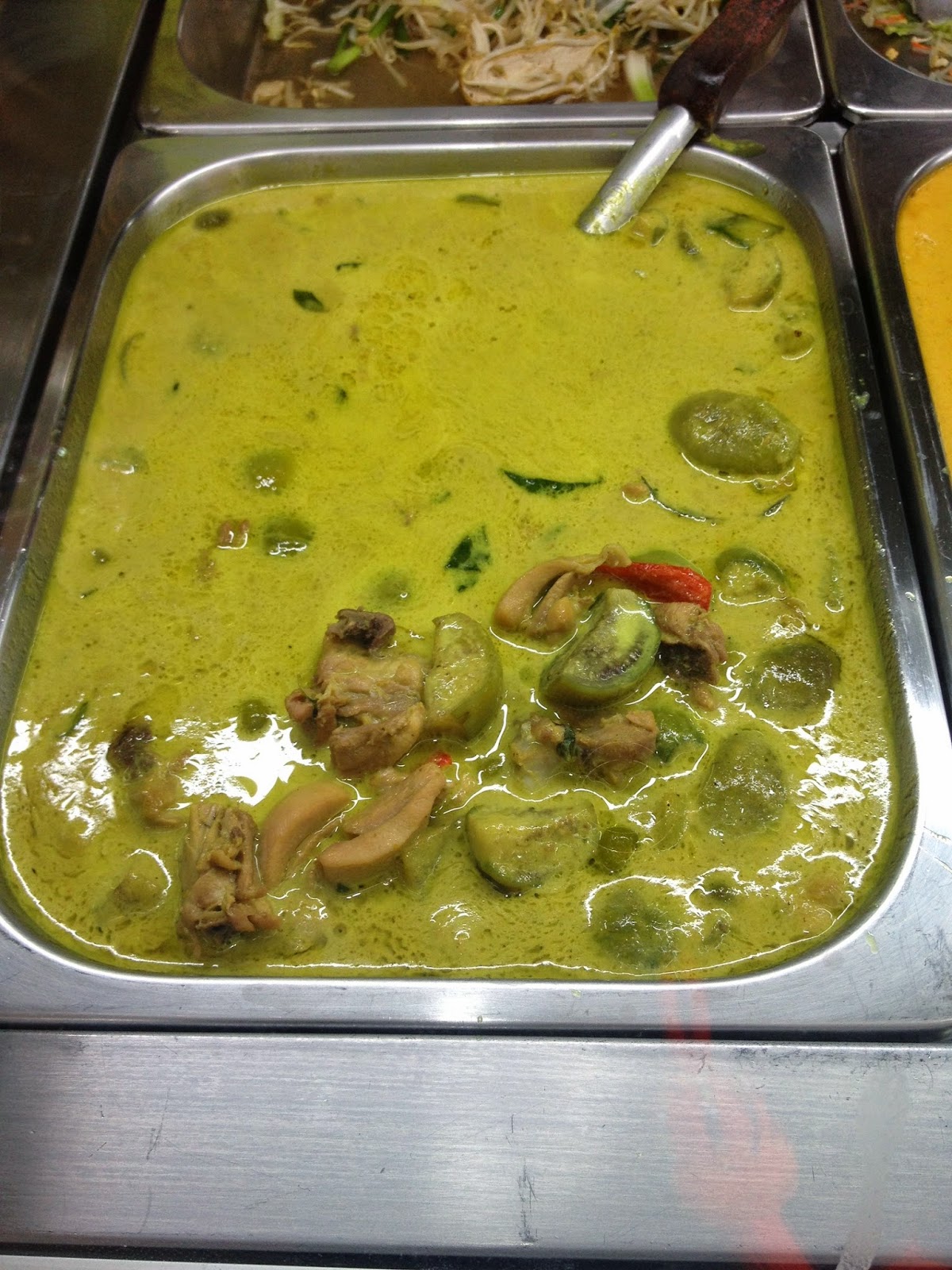 I enjoyed the green curry aroma and taste but the chicken drumsticks in the dish were not for me - I am spoilt with the Western food... 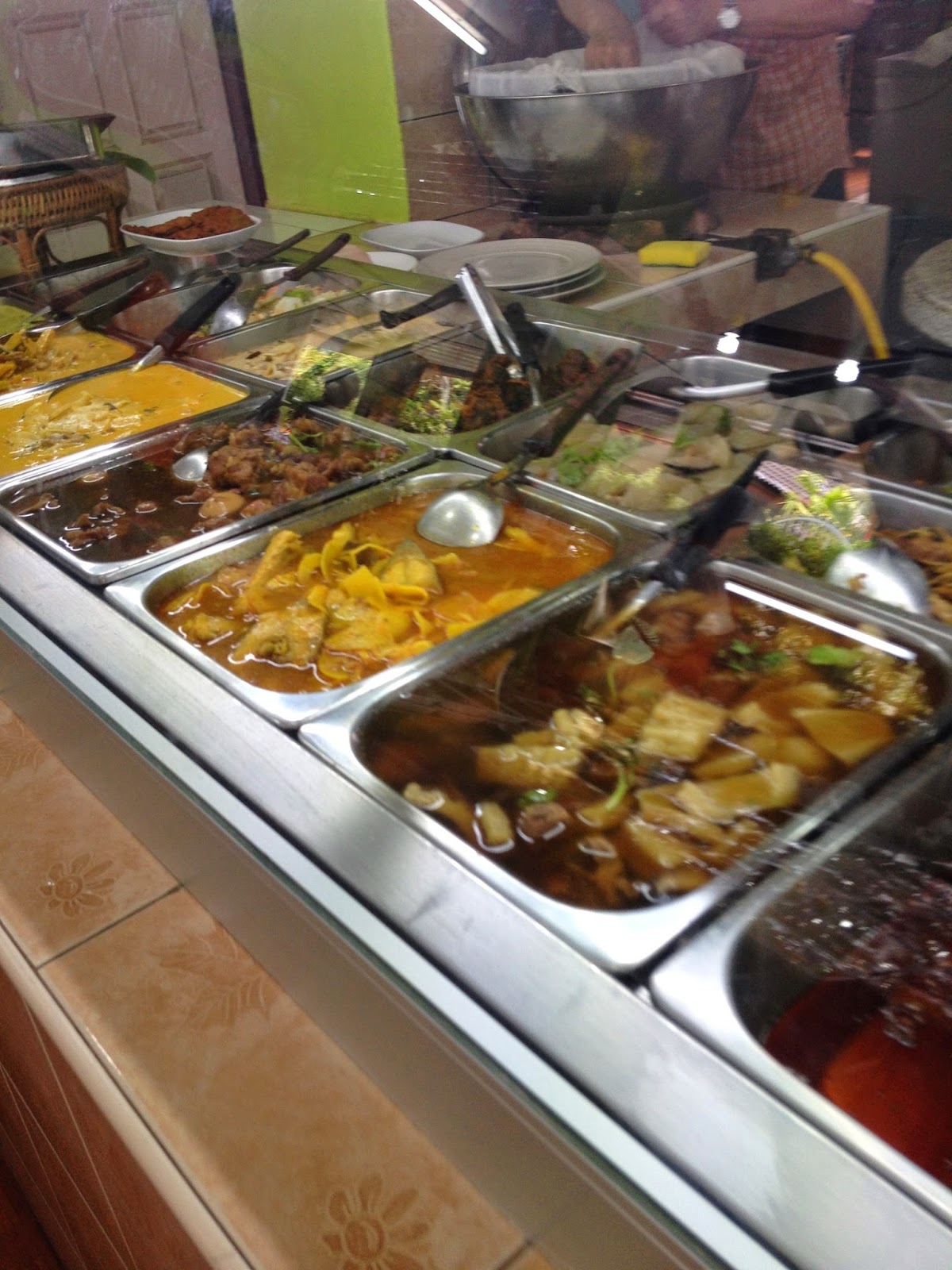 In fact I do not think that there are menus here at all. This restaurant is more like a buffet kitchen - there are a number of steel heated dishes with the dish above and then you choose by asking for that dish - well if I could speak Thai. 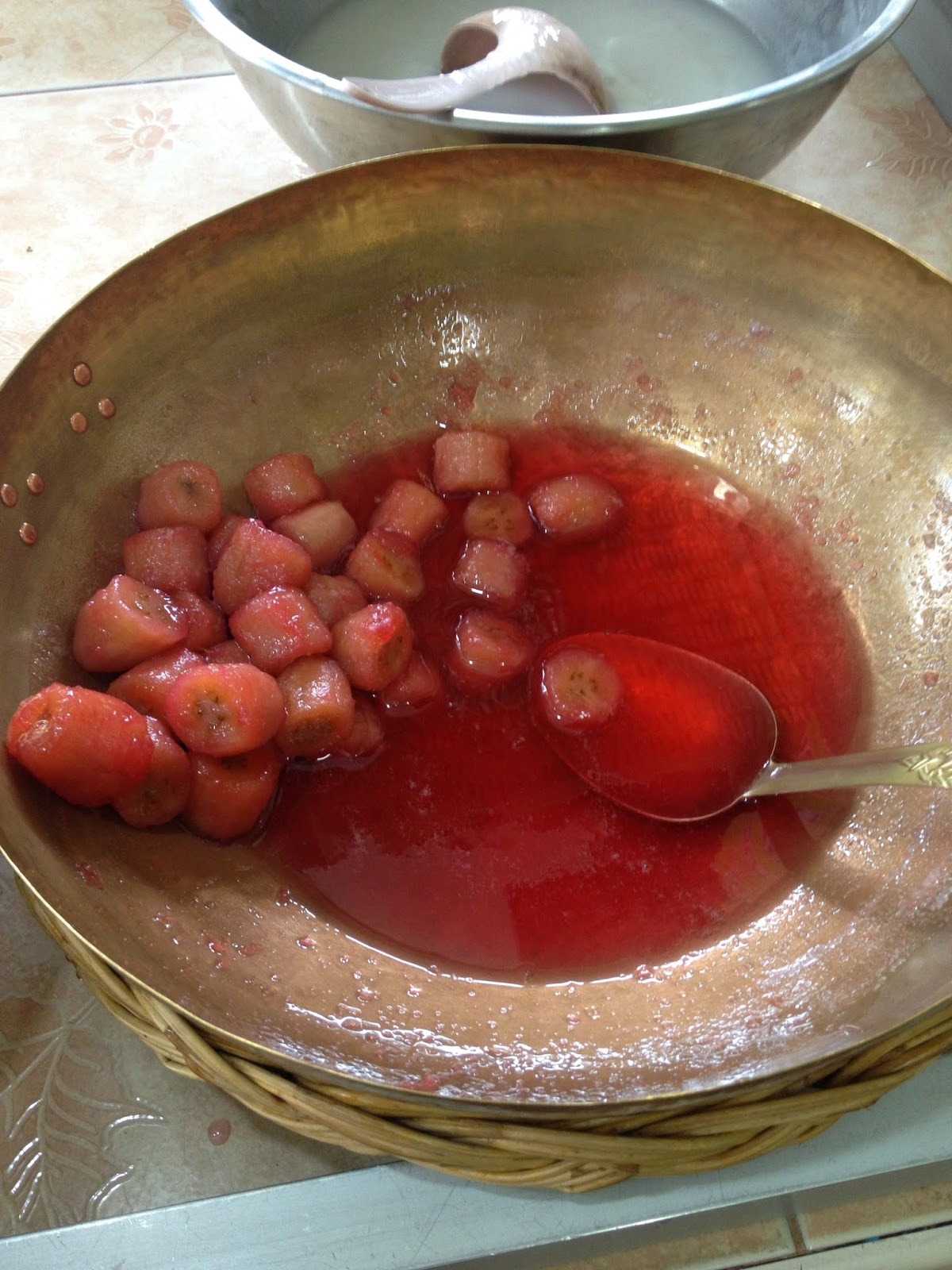 This is the first important thing to be aware of - the language of the staff is Thai and trying to explain what you would like is difficult because it might not actually be there. I have found a Food App (Thai Talking Food) for indicating what you want but i have not found an App which is able to photograph food and then tell you what it is - now that is a clever idea, do you think there is a patent?

The second thing is that this is certainly food which does not last so get there early if you want lunch, I would suggest before 1pm! 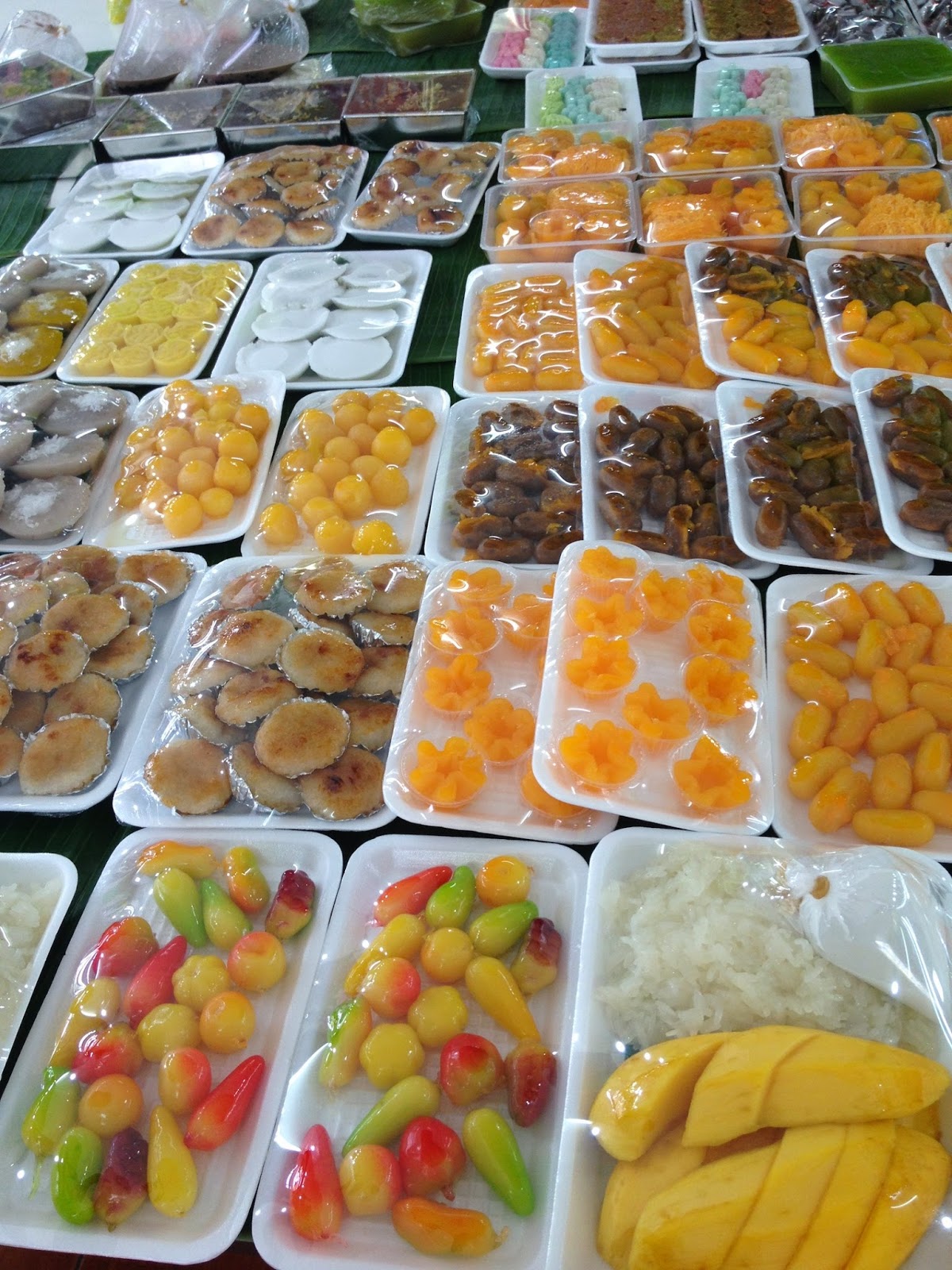 Then there is also a lot of food which is packaged to take away - mostly Thai sweets. 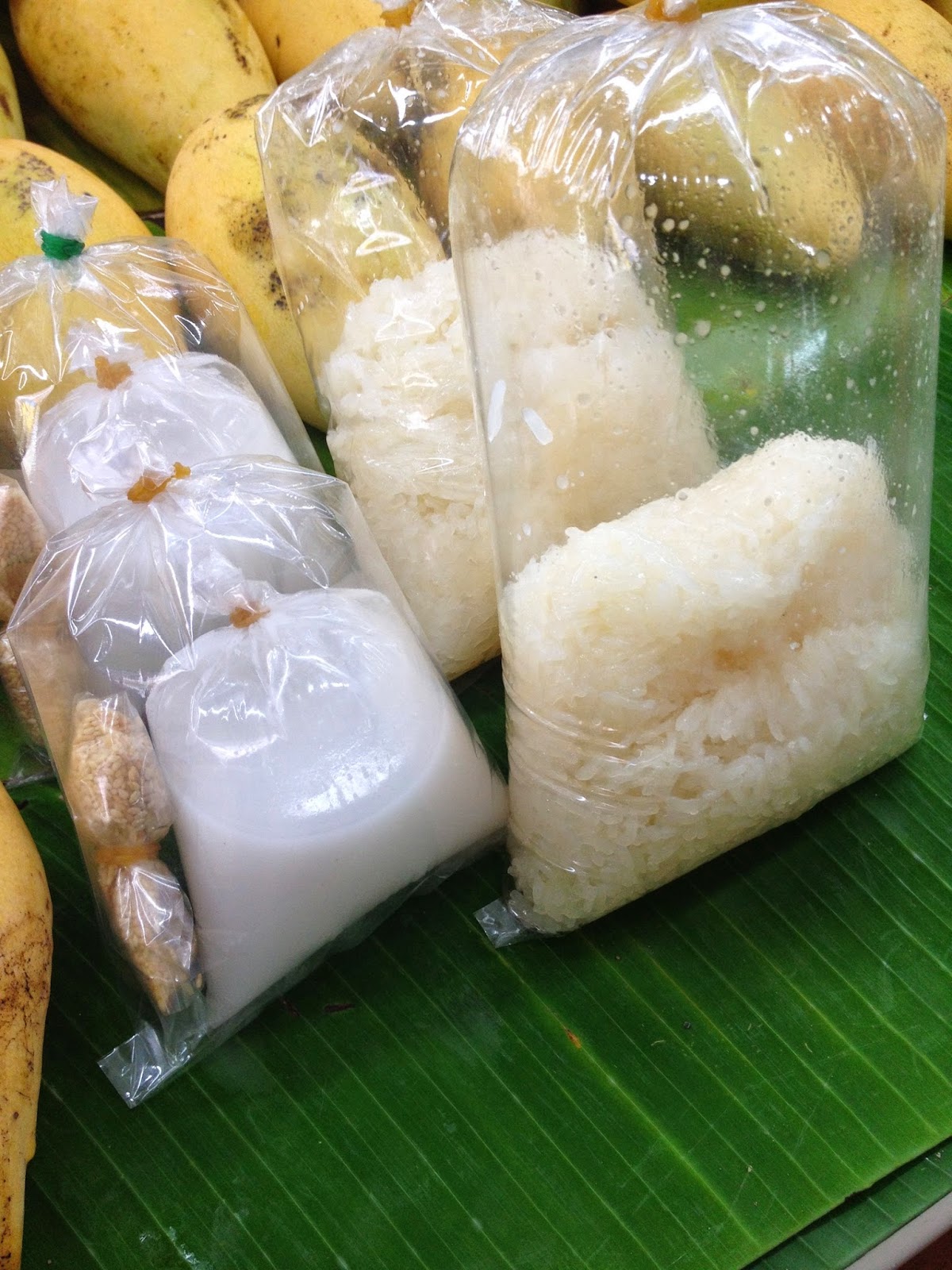 BUT get there early - fresh mango and sticky rice is a must! 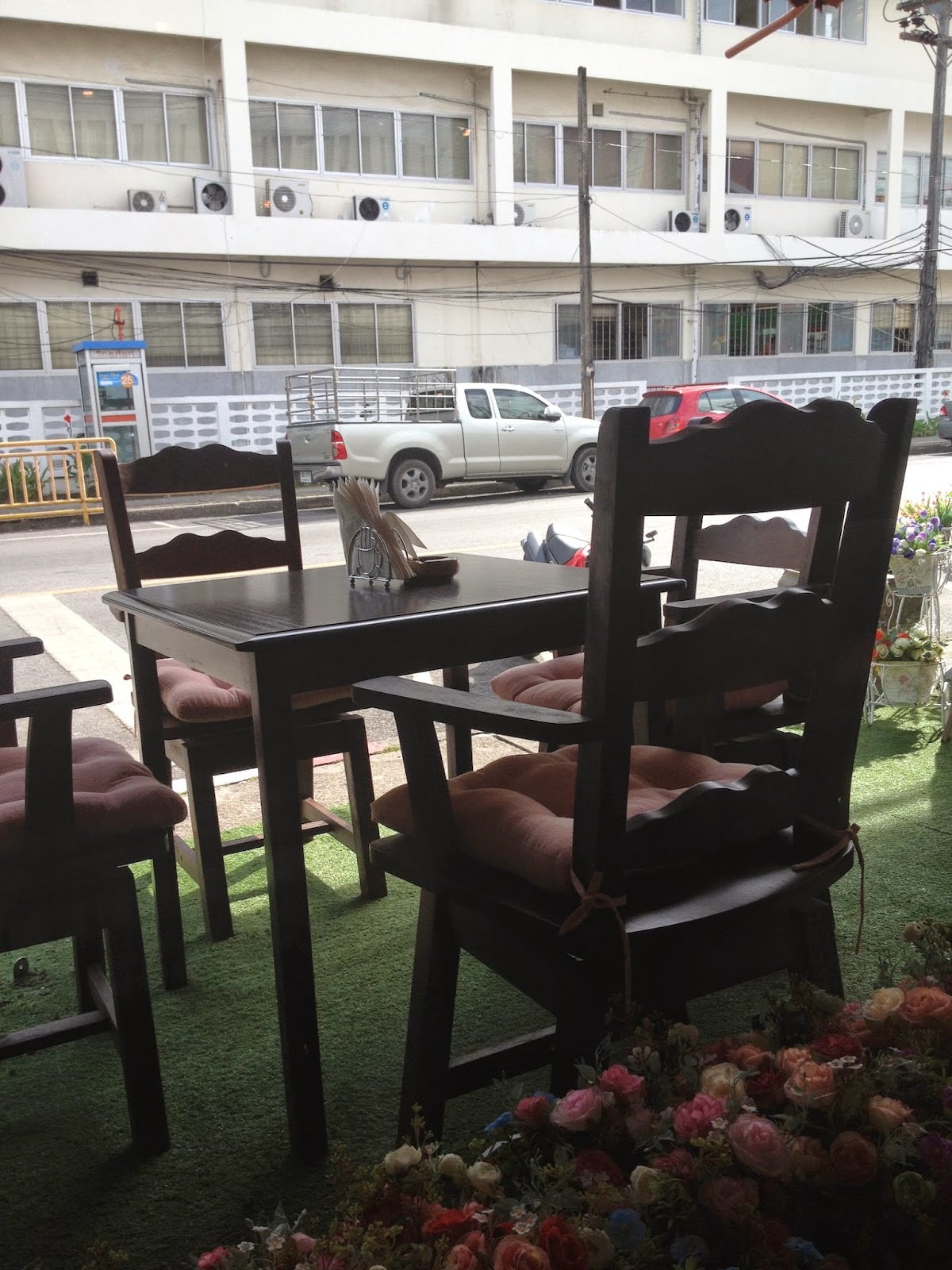 Memay Cafe is not in the heart of Phuket Town but is on Debuk Road very near to my favourite computer shop - Phuket Alpha.

This was quite a recent development and it did have a nice feeling when Jemma and I popped in after school. The service was good and the air-conditioning was cold. 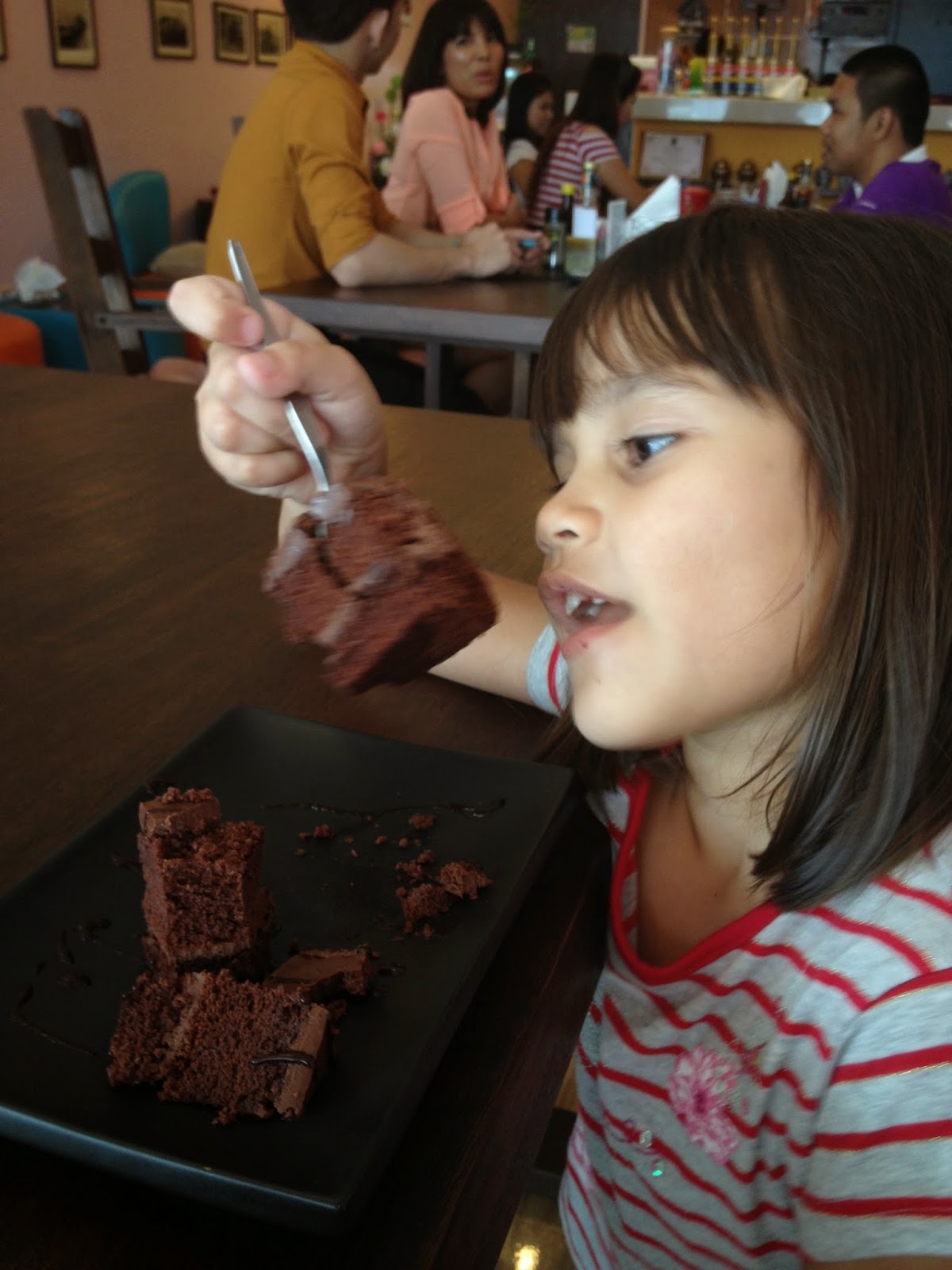 The chocolate cake was good. 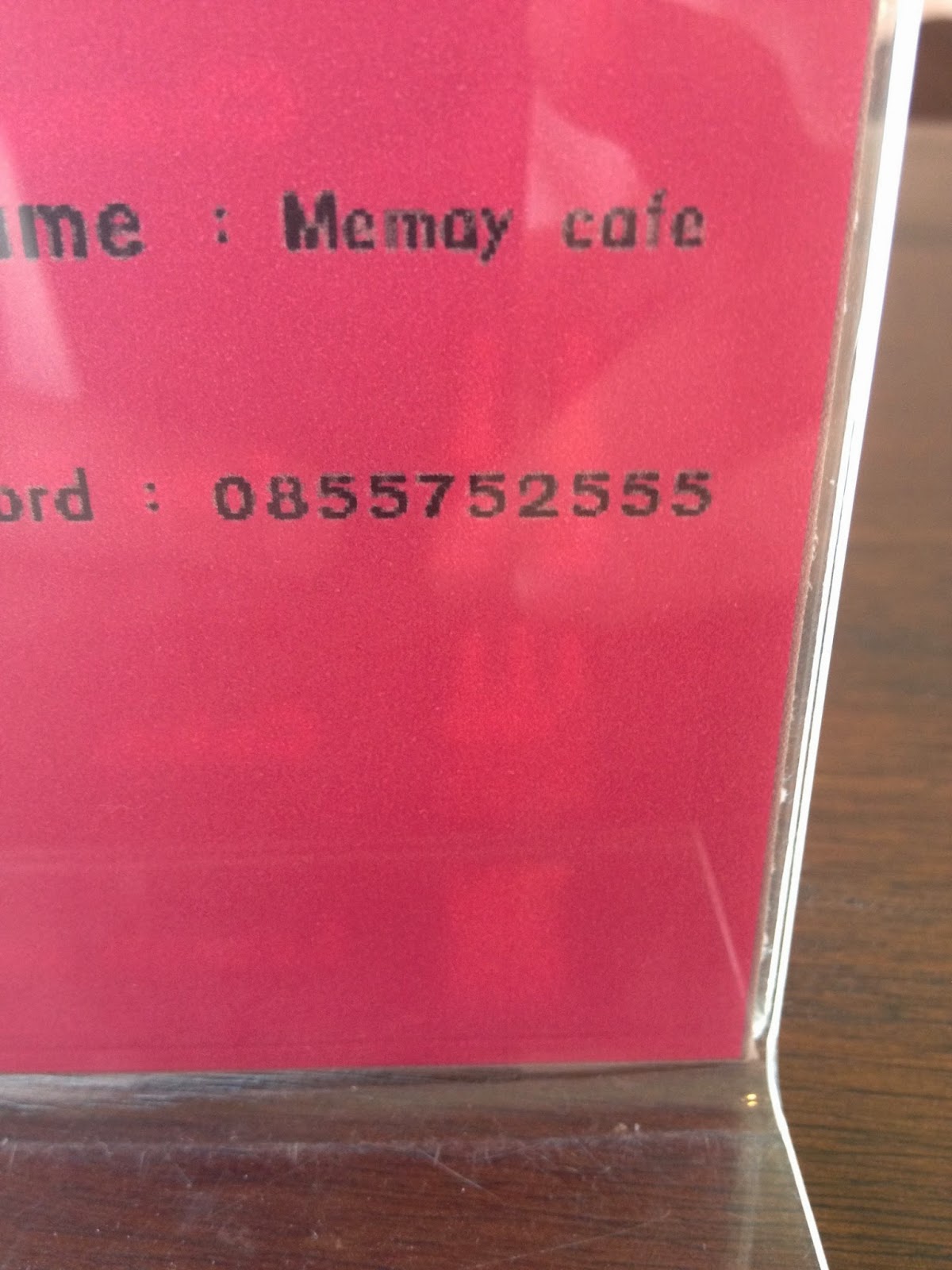 The WiFi was free. 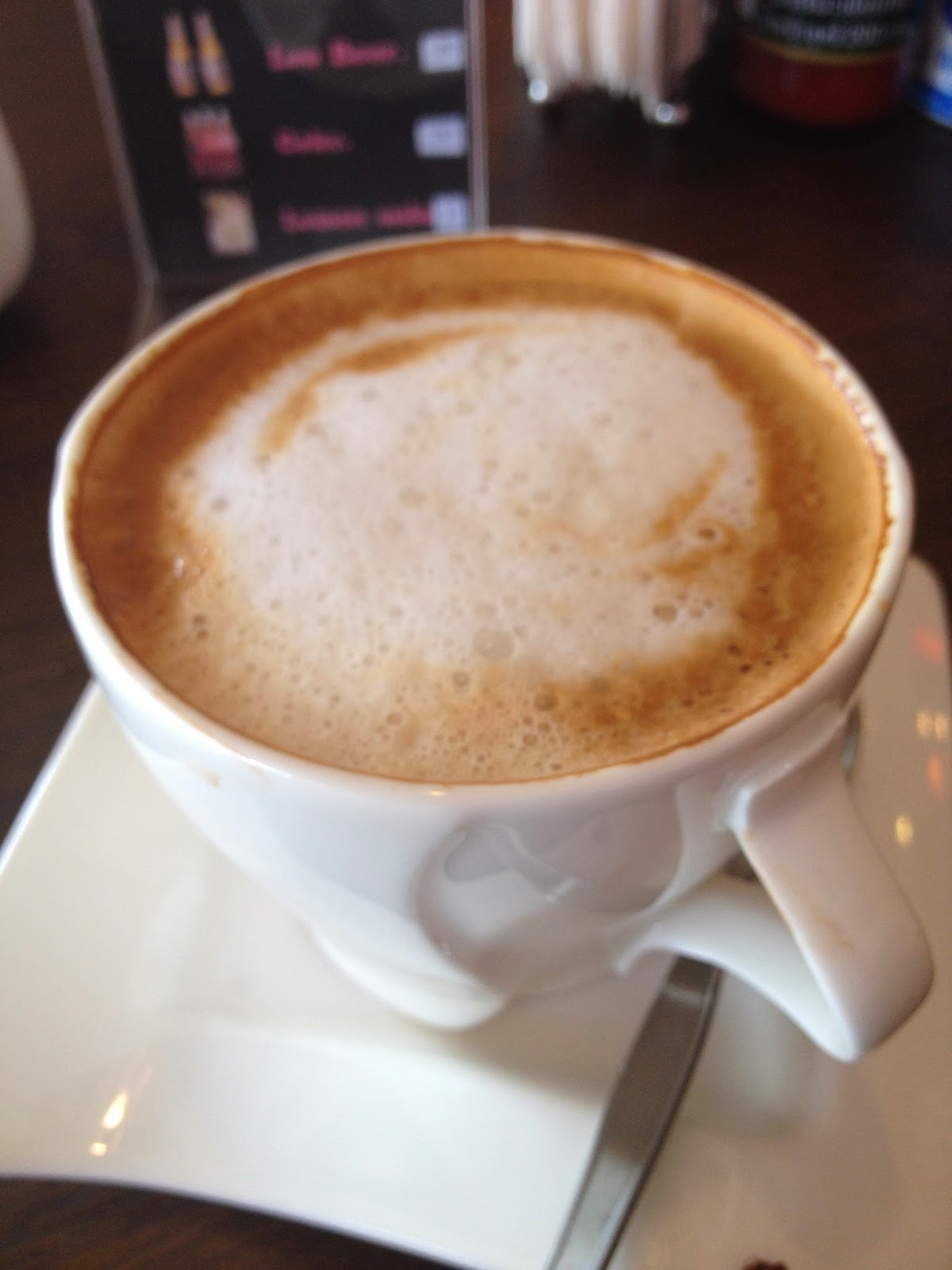 The coffee served in trendy cups and was relatively strong

BUT there were very few customers in there when we returned and I am unsure whether it will last with the coffee shops already opening up in Phuket Town... 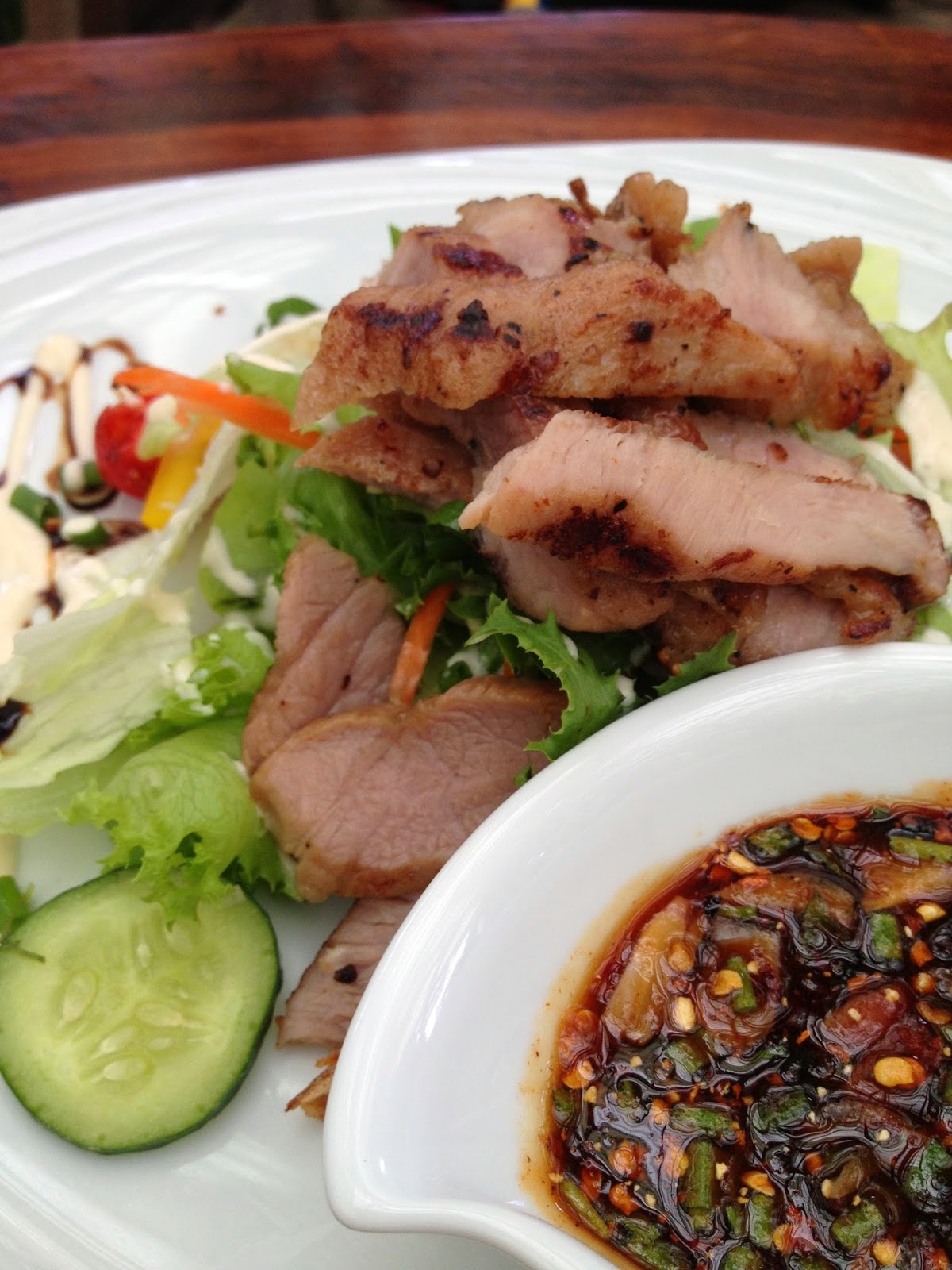 This is certainly a restaurant for local Thai people - there was nothing available in any other language but Thai and I could not make myself understood even with my smattering of Thai.

We had a selection of local dishes - there was a grill and the chicken outside - and it was certainly delicious, then they brought the sauces and we had to have more. 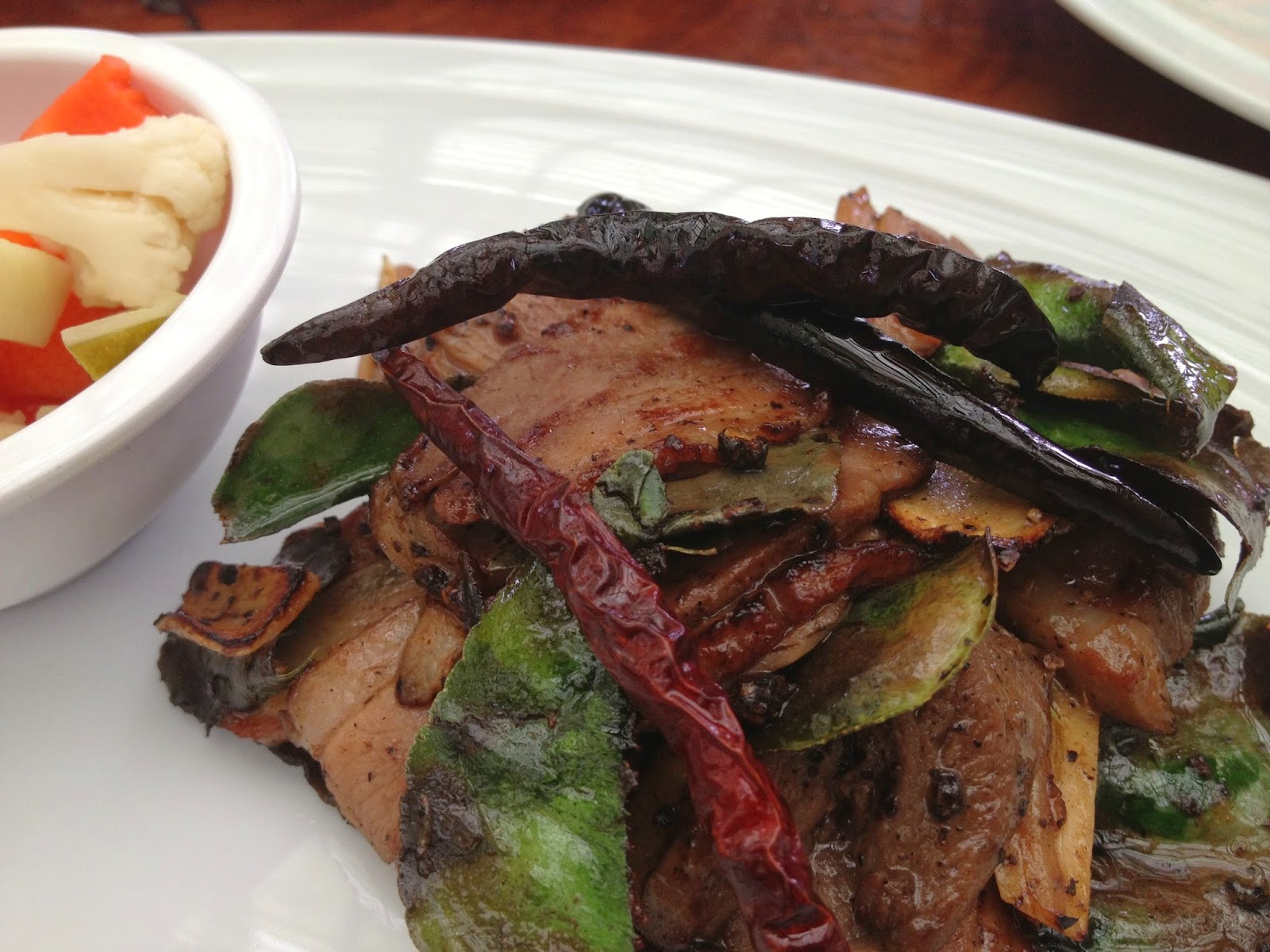 In fact I took so little notice because the food was so clearly freshly prepared and cooked  that I didn't really notice what everything was and ate it all, definitely a place to go back to - but I would need to learn Thai or I recommend taking someone fluent with you

So unless you can make yourself clear as to what you want then I would not visit unless you are quite happy to point OR try the Thai Talking Food App. Here is a review from a Thai food website. 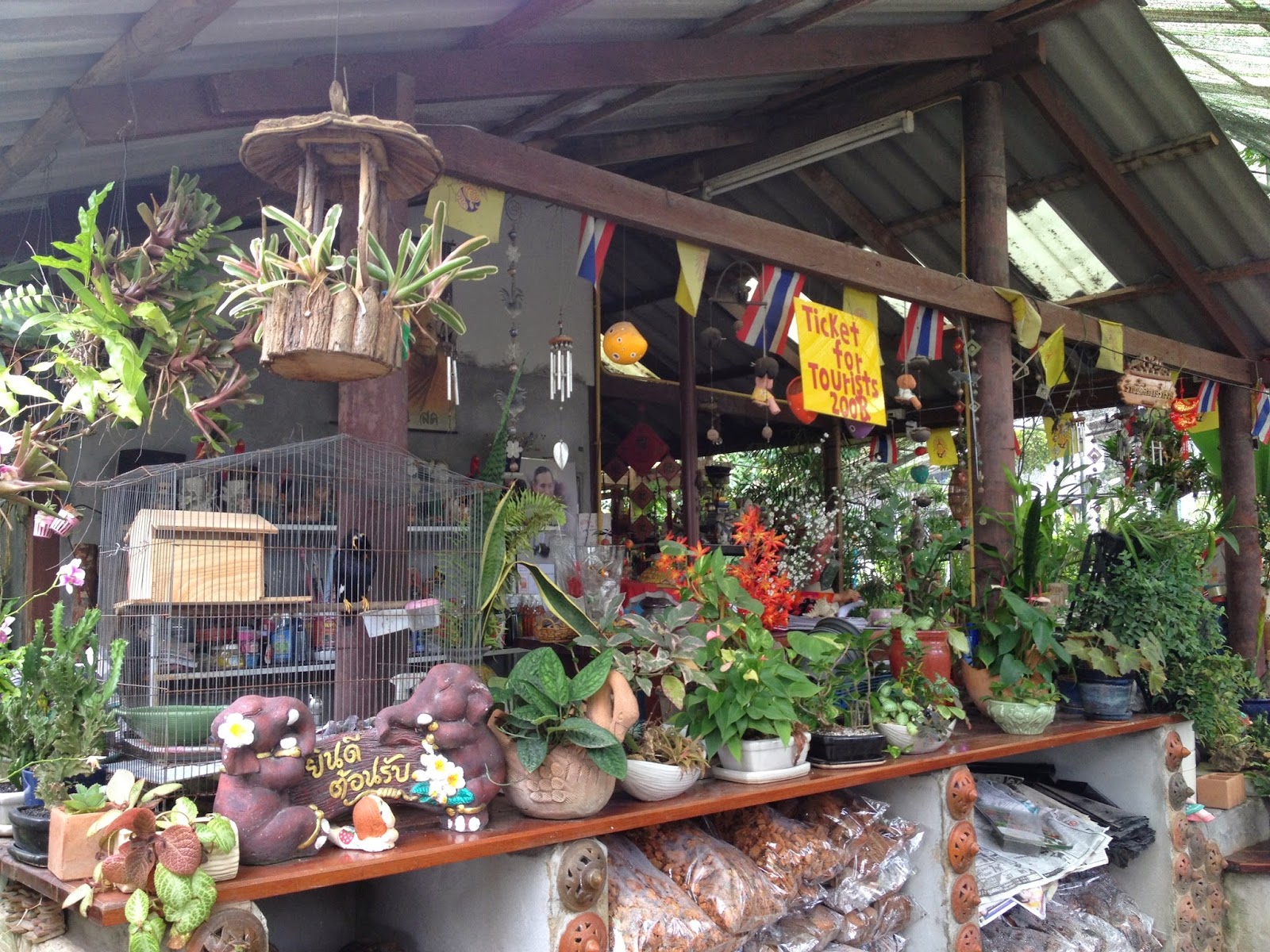 There is also an Orchid farm at the back (200 Baht entry) and another restaurant next door - Jee Hua Steaks + Pasta.


View timinphuket - restaurants and coffee shops in a larger map
No comments: 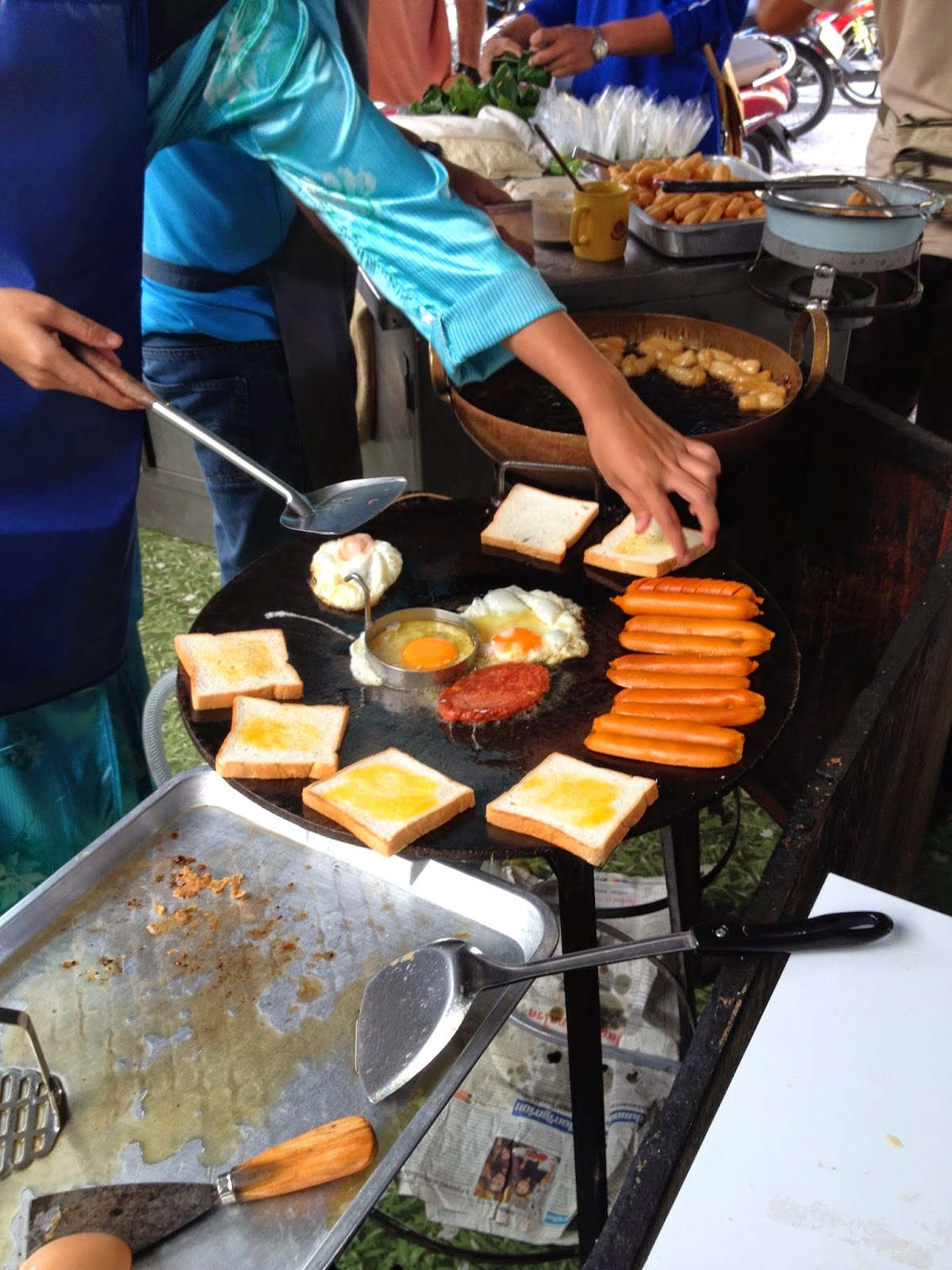 So what is a Thai Breakast?

The large cooking Wok above is a selection of the foods which were being cooked here this morning. Looks almost Western? 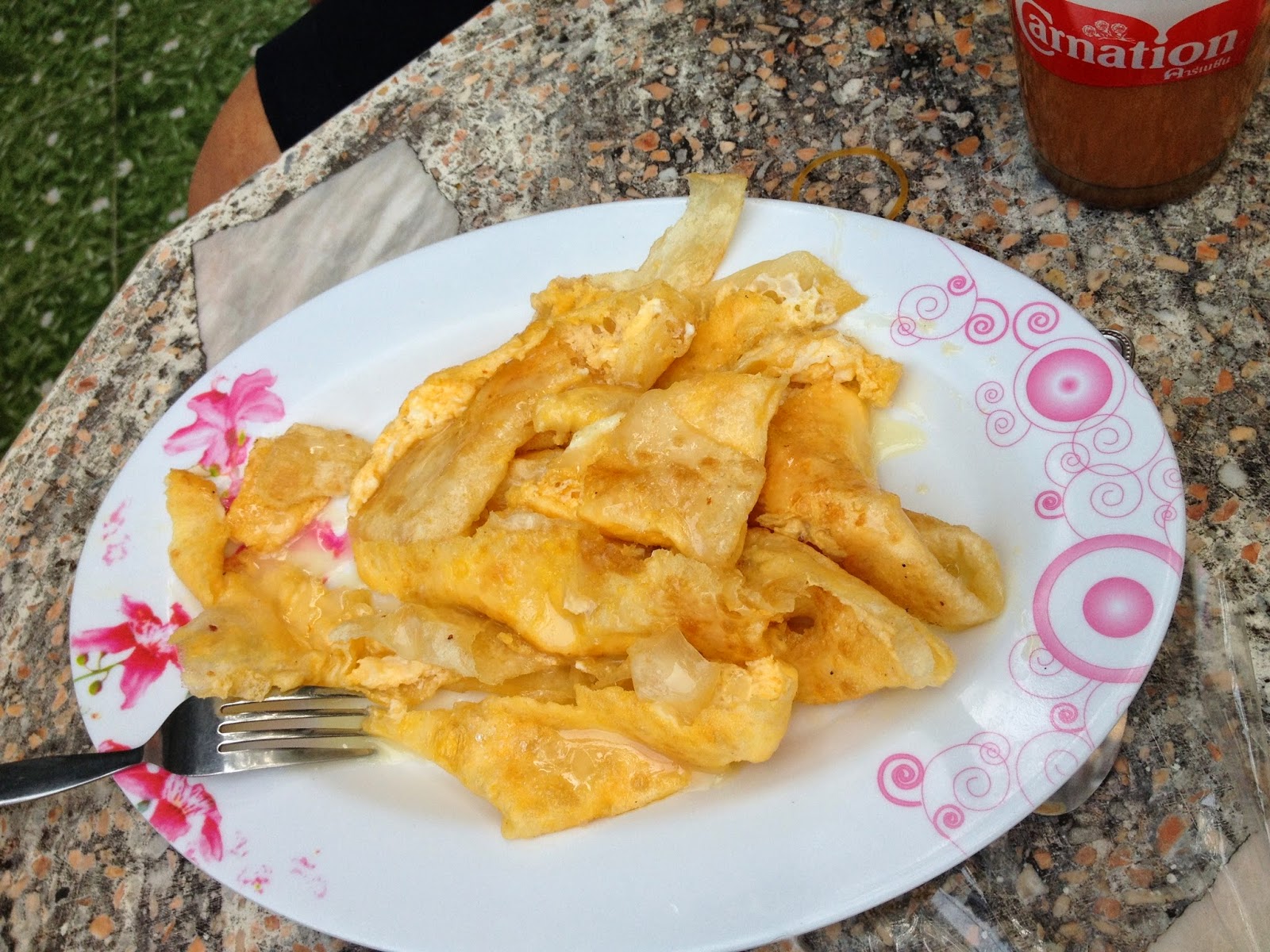 Then there are the sweetened omelettes which you can have - do they cut them up to make them easier to eat? 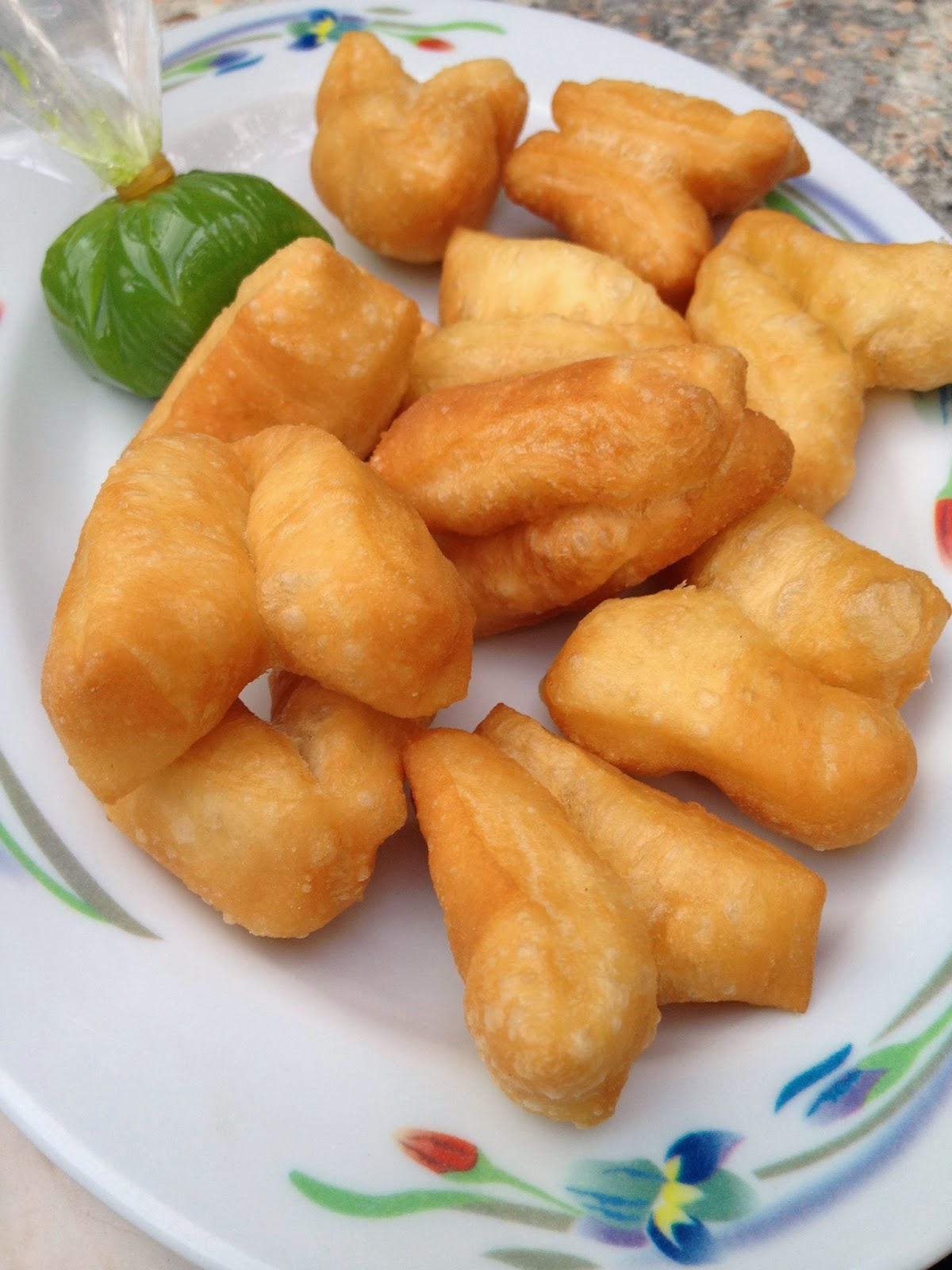 Patongkoh, Virgin's Knees and other spellings describe these rolled dough pieces which I have a soft spot for - for some people in Thailand it is the traditional dish but I don't think that they are made in the homes? Here is a link to the making of the Patongkoh that I wrote previously. 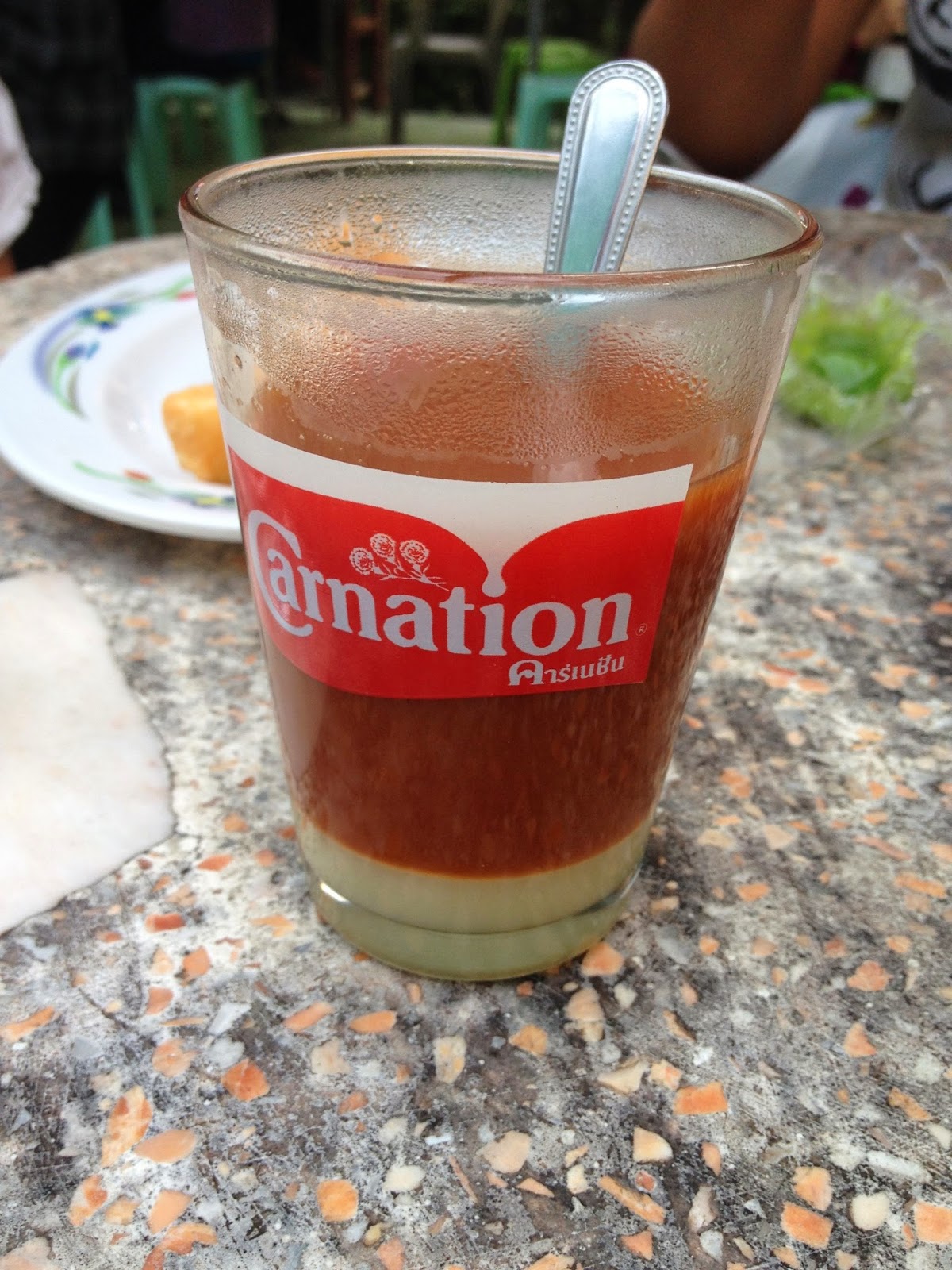 Then there is the explosive sweet coffee - that is certainly strong with a layer of condensed milk at the bottom.

This restaurant is family run and seems to only open for breakfast but I have no more details.


View timinphuket - restaurants and coffee shops in a larger map 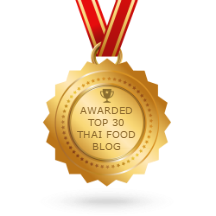